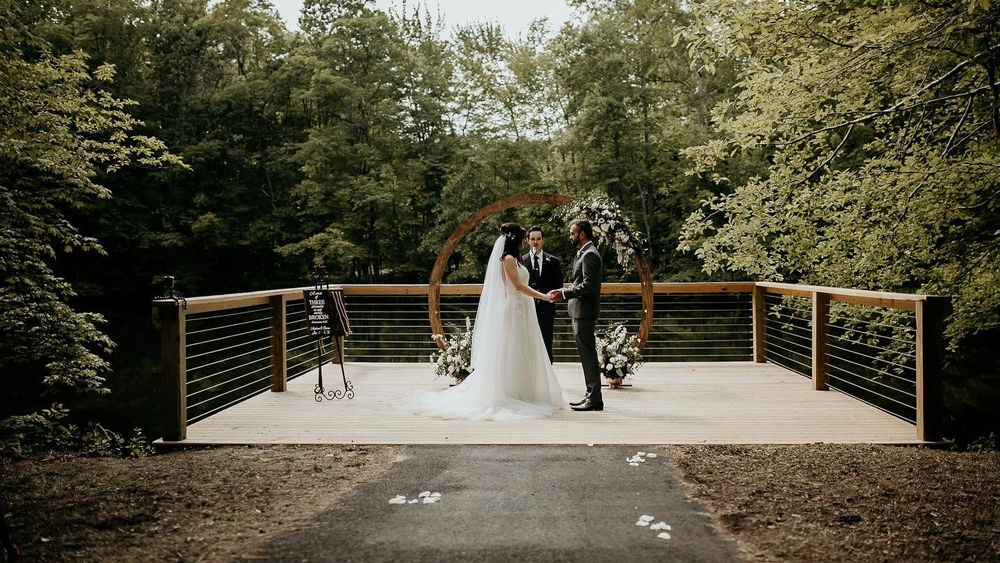 The Woods at Eisler Farms

In 2013 Amelia moved from Philadelphia, Pennsylvania to Dubai, UAE to pursue her Master's in International Business. Four years later TJ was boarding a flight from Toronto, Canada to start a similar adventure, working in Dubai. From Bumble beginnings, Amelia and TJ quickly hit it off, sending several hundred-word messages back and forth before TJ took Amelia on a “Canadian Date” – ice skating in Dubai Mall. Amelia, having not ice skated in 10+ years, was quick to hold TJ’s hand for “support”, and it was clear neither wanted the date to end when they kept finding new excuses to stay at the mall. Ice skating would later become their annual anniversary tradition. In the same week they had their second and third dates – a BBQ in the desert, and camping on top of the tallest mountain in the country.

One of Amelia’s friends would later ask how she knew that TJ was someone special, and she explained it was when she found out that he too had camping gear in Dubai that she knew they were on the same wavelength. For TJ the timing was the same, but the reasons were a bit different – it was a conversation where Amelia explained the impact of oil prices on Russian tourism and the economy of Dubai that made him view Amelia as someone he could see a future with. Mother nature helped the budding relationship with a spectacular light show while they were on a beach camping trip and their surroundings ignited with glowing plankton in the sea, lightning on the horizon, and a meteor shower in the sky... The pair lay on the beach and became acutely aware they were in love.

Their shared sense of adventure led them to travel to 17 countries together in their first two years of dating. When Covid hit they found new ways to explore the world, from painting to pickling, and learning to cook cuisines from around the world, using weekly themes like Greek, Indian, and Japanese.

Both always knew that they wanted to settle down and start a family closer to their families and friends in North America. While there were positives and negatives to both countries one large orange negative in the USA helped them decide on Canada. From one of the busiest cities in the world to one of the tiniest towns in Canada, they settled into a house on Lake Erie in Selkirk, Ontario with their Dubai street cat “Moussa”.

Most people don’t know – but there were actually three proposals, each with progressively better rings. The first was while Amelia and TJ were camping on a secluded island on the Georgian Bay with a key ring. The second was at their home by the water where TJ had set up candles, champagne, and a projector to show a slideshow of some of their favorite memories - this time a costume jewelry ring was used. Finally, after months of delays, the ring they designed together was ready, and so for a third and final time, TJ proposed to Amelia in the shade of the trees in their backyard.

Amelia and TJ are so thrilled to celebrate their love with all of you in a setting close to their hearts – on the water in The Woods.